The Council of Gods, Part 1 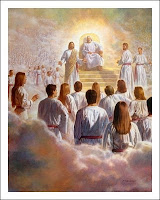 The religion of Ancient Israel has been called “monotheistic” which is understood to mean belief in one god and only one god. The Hebrew Bible, the Old Testament is filled with calls to give complete devotion to Yahweh and to none other. Consider the following passages:

If there is one storyline that is told again and again in the Old Testament it is that Yahweh blesses Israel, Israel goes after other gods, Yahweh warns Israel through his prophets, Yahweh punishes Israel, Israel repents, and Yahweh blesses Israel, and the cycle continues. In the LDS church this kind of repeated behavior within a society is called the “Pride Cycle” and is also found in the Book of Mormon. How then can we explain this statement by Joseph Smith?

This statement is seemingly very radical and strange to modern Christian sentiments, not to mention to Jewish and Muslim sentiments. In Islam, monotheism is the foundational principle of the faith. It is called the Shahadah: “I bear witness that there is no god but al-Lah and that Muhammad is his Messenger.” Jews have a similar proclamation of faith called the Shema: “Hear, O Israel: the LORD our God is one LORD” (Deuteronomy 6:4). Christians have a bit more difficulty with monotheism because Jesus Christ is the Son of God and the Holy Ghost is understood to be God as well. What do we make of three Gods? The traditional solution is the Trinity as expressed in the Athansian Creed. Let me continue with the quote from Joseph Smith.

“I have always declared God to be a distinct personage, Jesus Christ a separate and distinct personage from God the Father, and the Holy Ghost was a distinct personage and a Spirit: and these three constitute three distinct personages and three Gods. If this is in accordance with the New Testament, lo and behold! we have three Gods anyhow, and they are plural; and who can contradict it?... the doctrine of a plurality of Gods is as prominent in the Bible as any other doctrine. It is all over the face of the Bible. It stands beyond the power of controversy. A wayfaring man, though a fool, need not err therein.” [1]

Joseph Smith makes a very good point here and it is often overlooked. When he called “Jesus Christ a separate and distinct personage from God the Father” he was in direct violation of the Athansian Creed which says “So are we forbidden by the Catholic Religion; to say, There are three Gods, or three Lords.” But though he may have been in violation of this creed he was on sure scriptural footing. I believe Joseph Smith was right to say that the plurality of Gods is “all over the face of the Bible”. However, an important point that he made and I shall make as well is this:

“Paul says there are Gods many and Lords many. I want to set it forth in a plain and simple manner; but to us there is but one God—that is pertaining to us; and he is in all and through all... I say there are Gods many and Lords many, but to us only one, and we are to be in subjection to that one, and no man can limit the bounds or the eternal existence of eternal time.” [1]

The New Testament has plenty to say about the Godhead but I would like to focus here on the Old Testament and the Council of Gods. One of the best treatments I have found on the Council of Gods in relation to Mormon doctrine is that of Blake Ostler in the third of volume of the series “Exploring Mormon Thought: Of God and Gods”. It is an excellent book that I would recommend to anyone interested in the subject. Ostler defines a term he calls “metaphysical monotheism”:

“There exists a simple, immaterial substance SS that: (i) is necessarily the sole of instance of the kind ‘divine’ and utterly unique in the sense that there are no other members in the class of being occupied by SS; (ii) alone has ontologically necessary actuality; and (iii) everything else that is actual in any way depends upon SS for its actuality.” [2]

Ostler proposes, however, that metaphysical monotheism is an anachronistic view of the Hebrew Bible and not the original understanding of the authors. While it is clear from the Bible that Yahweh is foremost and preeminent, the only God worthy of devotion—there are passages that suggest that he is not the only being of his kind, the only divine being.

One interesting passage is found in Psalms 82:
“Elohim takes his stand in the assembly of El, among the gods he pronounces judgement. How long will you judge unjustly and favor the cause of the wicked? Selah. Defend the lowly and fatherless; render justice to the afflicted and needy. Rescue the lowly and poor; deliver them from the hand of the wicked. They neither know nor understand, wandering about in darkness; all the world’s foundations shake. I have said, You are gods and all of you sons of Elyon, But you shall die like mankind, and fall like one of the princes. Arise, O Elohim, judge the earth: for yours are all nations.”

What is going on here? This psalm is best understood in the context of an ancient Israelite belief. After the Flood the descendants of the three sons of Noah spread abroad across the earth and became many nations, seventy to be exact. Seventy names are listed in Genesis chapter 10 and 11. These chapters constitute a “Table of Nations”. This organization of nations was later referenced in Deuteronomy:

“Remember the days of old, consider the years of many generations: ask your father, and he will tell you; your elders, and they will tell you. When the Most High divided to the nations their inheritance, when he separated the sons of Adam, he set the bounds of the people according to the number of the children of Israel. For the Yahweh’s portion is his people; Jacob is the lot of his inheritance.” (Deuteronomy 32:8-9)

The passage above is a translation from the Masoretic text which date from between the seventh and tenth centuries of the Common Era. An older version, however, is found in the Dead Sea Scrolls which dates back to 200 BCE:

“When the Most High gave to the nations their inheritance, when he separated humanity, he fixed the boundaries of the peoples according to the number of divine beings. For Yahweh’s portion is his people, Jacob his allotted heritage.” (4QDeut 32:8-9)

The Hebrew phrase for “divine beings” in the Dead Sea Scrolls is “bene ‘elohim” which means “sons of God”. It is the opinion of many scholars that the Masoretic version of this passage was a product of some alteration that occurred in the interim—evidently in an effort to remove any inference that there were other divine beings along with Yahweh. But the message seems quite clear—this was an ancient belief. If the Israelite children were to ask their fathers or elders they could tell them the story. When the nations were divided up Yahweh was given charge of Israel.

What is seen here is exactly what Joseph Smith had taught—there may be many gods, many divine beings but one is superior to them all. So was the understanding in ancient Israel. Among the gods there was but one who was worthy of worship and that is Yahweh. But what is the role of the other gods? What does the Council of Gods do? More on that for subsequent posts.