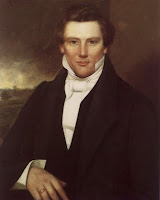 Thomas Paine, according to his own account, realized soon after writing Common Sense, “that a revolution in the system of government would be followed by a revolution in the system of religion.” [1] He had observed that the “adulterous connection of church and state” was effectively employed to limit religious discussion and exploration by means of the established creeds.  He also believed that if this connection were dissolved “a revolution in the system of religion would follow.” [2] Paine was prophetic in maintaining that a religious revolution would come, though this revolution was not a widespread conversion to Deism, as he might of hoped.  The America visited by Alexis de Tocqueville years later was teeming with religious fervor.  The religion of America was not some stale, second-hand observance but a dynamic driving force impelling people’s lives.  De Tocqueville reported: “The Americans combine the notions of Christianity and of liberty so intimately in their minds, that it is impossible to make them conceive the one without the other; and with them this conviction does not spring from that barren traditionary faith which seems to vegetate in the soul rather than to live.” [3]


It was at this time that Joseph Smith burst onto the American religious scene seeking “to lay a foundation that [would] revolutionize the whole world.” [4] Joseph Smith, like Paine, resisted the constraints of creeds.  He thought himself a prophet and spoke with confidence as one having authority that transcended creeds. Like Moses, he wished enter into the very presence of God to receive knowledge directly from its eternal source.  “I want to come up into the presence of God, and learn all things; but the creeds set up stakes, and say, ‘Hitherto shalt thou come, and no further;’ which I cannot subscribe to.” [5] Joseph Smith was willing to push the boundaries of religious innovation further than most would dare.  “Thy mind O man if thou wilt lead a soul into salvation must search into and contemplate the darkest abyss and the broad expanse of eternity, thou must commune with God.” [6]
Joseph understood that during his short ministry he was sliding fast into heterodoxy, at least relative to the creeds of established Christianity.  And he often felt frustrated that his followers were not able to keep pace.  “But there has been a great difficulty in getting anything into the heads of this generation.  It has been like splitting hemlock knots with a corn-dodger for a wedge, and a pumpkin for a beetle.  Even the Saints are slow to understand.  I have tried for a number of years to get the minds of the Saints prepared to receive the things of God; but we frequently see some of them, after suffering all they have for the work of God, will fly to pieces like glass as soon as anything comes that is contrary to their traditions.” [7] I can certainly sympathize with the Saints for being slow to accept Joseph’s more radical teachings.  But I also admire Joseph’s tenacity in pushing religious ideas to a more expansive vista of possibilities.
One of Joseph’s followers, Parley Pratt, was nearly as intrepid.  In his great work Key to the Science of Theology, Pratt celebrated “an age of progress, of change, of rapid advances, and of wonderful revolutions.” [8] He was especially enchanted by the discoveries of science and technology.  Yet he, like Joseph, was frustrated with the comparatively slow pace of religious development.  “While every science, every art is being developed; while the mind is awakened to new thought; while the windows of heaven are opened, as it were, and the profound depths of human intellect are stirred—moved from the foundation on all other subjects, religious knowledge seems at a standstill.  The creeds of the Fathers seem to have been cast in the mold of other ages, to be adapted to a more narrow sphere of intellectual development, and to be composed of material too much resembling cast iron; or, at least, not sufficiently elastic to expand with the expansion of mind, to grow with the growth, and to advance with the progressive principles of the age.” [9]
This time was a veritable Pentecost for the early Saints.  The heavens were opened and the Spirit surged forth among them as a rushing wind, “as pure intelligence” generating “sudden strokes of ideas.” [10] This spirit led to new and innovative views.  There are certain ideas from this movement that I would call expansive.  They were expansive because of the freedom with which they were explored and also because of their immense implications.  I have thought of ten ideas or doctrines taught to one extent or another in the history of the Latter-day Saint movement that I think best exemplify this expansive spirit
1.  Revelation
2.  Free Agency
3.  Rejection of Original Sin
4.  Pre-mortal Existence
5.  Materialism
6.  Universal Salvation
7.  Law of Consecration
8.  Heavenly Mother
9.  Eternal Marriage
10.  Mortals Can Become Gods
While some of these ideas are not unique to Mormonism, taken together they constitute perhaps the most dramatic restructuring of Christian doctrine in all of history.  The pioneers of Mormon thought did not settle for a tidy systematic theology beginning with creation and ending with the final judgment.  Rather, they probed further past the veil into the eternal past and eternal future.  What was going on before creation?  What are even being saved for?  Joseph had a vision of eternity that extended far beyond playing harps in the clouds.  What could be more expansive than to progress from one state to the next for all eternity, creating and designing as God, attaining all power and all intelligence?
Religious ideas matter.  They impact they way we see the world and each other.  They affect the way we treat each other.  What is the impact of seeing people not as fallen creatures, stained with sin from birth, but rather as divine beings, gods in embryo?  What if we took the Law of Consecration seriously and strived to build Zion with no poor among us?  We hear a lot of people telling each other they are going to Hell.  What if instead we told each other we were all going to Heaven and started creating Heaven on earth now?  There is power in these ideas and I believe they are worth exploring.
References
[1] Thomas Paine, The Age of Reason (from The Thomas Paine Reader, Penguin Classics) p. 401
[2] Ibid
[3] Alexis de Tocqueville, Democracy in America, (New York: A. S. Barnes & Co., 1851) p. 335
[4] History of the Church 6:365
[5] Ibid, 6:57
[6] Ibid, 3:295
[7] Ibid, 6:184-185
[8] Parley P. Pratt, Key to the Science of Theology (Deseret Book) p. vii
[9] Ibid, vii-viii
[10] Teachings of the Prophet Joseph Smith, sel. Joseph Fielding Smith [1976], 151.
Posted by Todd at 8:37 AM 4 comments: