Radical Nonviolence in the Book of Mormon 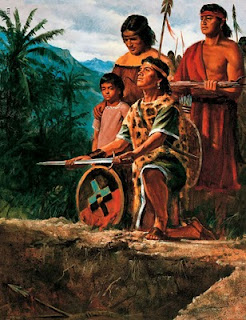 The Book of Mormon can be read as a story of two brothers—Nephi and Laman.  It begins with the family of Lehi, which is constantly divided between the influences of these two sons.  The brothers ended their lives as enemies, separated from one another and the rest of the history of this family was a constant struggle between these two groups, the Nephites and the Lamanites.  After hundreds of years this bad blood and intense hatred boils over into destruction of epic scale.
The Book of Mormon is written from the perspective of the Nephites and their perspective of the Lamanites is often less than flattering.  Historian Richard Bushman has speculated what the history would have looked like if Lamanites had written it. [1] The two groups had many prejudices toward each other, which they had carried down from their parents.
The Lamanites taught their children that Nephi had cheated Laman of his inheritance and sought to rule over his people and had stolen all of their records.  The Lamanites also taught their children “that they should hate them, and that they should murder them, and that they should rob and plunder them, and do all they could to destroy them; therefore they [had] an eternal hatred towards the children of Nephi.” [2]
For their part, the Nephites didn’t have a very high opinion of the Lamanites either.  When the four sons of the King, Mosiah, intended to go to the land of the Lamanites they were mocked by their fellow Nephites.  They said of the Lamanites that their “hearts delight[ed] in the shedding of blood.”  Some even suggested violence as the only solution: “Let us take up arms against them; that we destroy them and their iniquity out of the land, lest they overrun us and destroy us.” [3]
But the four sons of Mosiah did go the land of the Lamanites and their first experiences among them did much to confirm the prejudices of the Nephites.  They were treated very harshly.  Ammon was bound and taken before the local leader.  Luckily, he was able to win over the king, Lamoni.  His brothers were not as lucky, and they were beaten and thrown into prison.  But eventually, relations started to ease and many of the Lamanites began to change.  They had been murderous and bloodthirsty, but when they learned of the Gospel they began to see the error of their violence.
Some of the Lamanites began to change in ways so radical that we might even think unwise.  They still lived amid the danger of invasion and attack but their hearts were so transformed that they had no more desire to fight.
Their king said to his people: “Now, my beloved brethren, since God hath taken away our stains, and our swords have become bright, then let us stain our swords no more with the blood of our brethren… Oh, how merciful is our God! And now behold, since it has been as much as we could do to get our stains taken away from us, and our swords are made bright, let us hide them away that they may be kept bright, as a testimony to our God at the last day, or at the day that we shall be brought to stand before him to be judged, that we have not stained our swords in the blood of our brethren since he imparted his word unto us and has made us clean thereby.  And now, my brethren, if our brethren seek to destroy us, behold, we will hide away our swords, yea, even we will bury them deep in the earth, that they may be kept bright, as a testimony that we have never used them, at the last day; and if our brethren destroy us, behold, we shall go to our God and shall be saved.” [4]
So they buried their weapons, promising never to raise them again.  They were indeed attacked and began to suffer a mass slaughter.  And they just gave up their lives, because “they buried the weapons of war, for peace.” [5] As the other Lamanites were killing them they saw that they didn’t fight back.  “Now when the Lamanites saw this they did forbear from slaying them; and there were many whose hearts had swollen in them for those of their brethren who had fallen under the sword, for they repented of the things which they had done.  And it came to pass that they threw down their weapons of war, and they would not take them again, for they were stung for the murders which they had committed; and they came down even as their brethren, relying upon the mercies of those whose arms were lifted to slay them.  And it came to pass that the people of God were joined that day by more than the number who had been slain.” [6] This radical nonviolence by the Lamanites was more disarming than retaliation.  But many died in the process.  It was a heavy cost but the result was a dramatic transformation of an entire people. 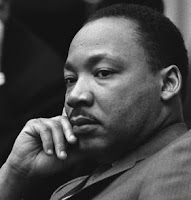 In modern times nonviolence has been extremely effective in bringing about dramatic change. Mohandas Gandhi used nonviolence to end the occupation of India from British rule.  Martin Luther King, influenced by Gandhi, used nonviolent protest in his struggle for civil rights for African Americans.  But these men have been criticized by some who believed that nonviolence was weak and ineffective.   George Jackson, a member of the Black Panthers, said, “the concept of nonviolence is a false ideal. It presupposes the existence of compassion and a sense of justice on the part of one's adversary. When this adversary has everything to lose and nothing to gain by exercising justice and compassion, his reaction can only be negative.” [7]
But the enduring impact of Martin Luther King and Gandhi seems to vindicate and validate their nonviolent practices.  For one thing, the former oppressors have for the most part admitted their wrongdoing much as the murderous Lamanites recognized their own sin.  Had Martin Luther King encouraged violence, civil rights for Africans Americans might not have the widespread acceptance it has today.
The practice of nonviolence is not only effective to win people’s rights and freedoms.  It also brings people together.  The dream of Martin Luther King was not only that black Americans would enjoy the freedoms of white Americans.  Rather it was that “all of God's children, black men and white men, Jews and Gentiles, Protestants and Catholics, will be able to join hands and sing…” And who could argue with that?  Why would we not all want that?  At its heart, nonviolence appeals to the desire of every man and every woman for peace and love, that’s why it touches us all.  To quote the Book of Mormon one more time: "the preaching of the word had a great tendency to lead the people to do that which was just—yea, it had had more powerful effect upon the minds of the people than the sword, or anything else." [8]