Given the Resurrection of Christ 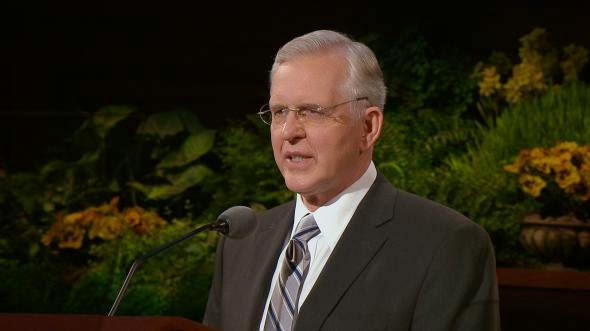 In the April 2014 General Conference of the Church of Jesus Christ of Latter-day Saints Elder D. Todd Christofferson said something very interesting:

“Given the reality of the Resurrection of Christ, doubts about the omnipotence, omniscience, and benevolence of God the Father—who gave His Only Begotten Son for the redemption of the world—are groundless. Doubts about the meaning and purpose of life are unfounded. Jesus Christ is in fact the only name or way by which salvation can come to mankind. The grace of Christ is real, affording both forgiveness and cleansing to the repentant sinner. Faith truly is more than imagination or psychological invention. There is ultimate and universal truth, and there are objective and unchanging moral standards, as taught by Him."

"Given the reality of the Resurrection of Christ, repentance of any violation of His law and commandments is both possible and urgent. The Savior’s miracles were real, as is His promise to His disciples that they might do the same and even greater works. His priesthood is necessarily a real power that ‘administereth the gospel and holdeth the key of the mysteries of the kingdom, even the key of the knowledge of God. Therefore, in the ordinances thereof, the power of godliness is manifest.’ Given the reality of the Resurrection of Christ, death is not our end, and though ‘skin worms destroy [our bodies], yet in [our] flesh shall [we] see God.’” [1]

This is quite scripturally appropriate. The scriptures say that it is on Christ that you must “build your foundation.” (Helaman 5:12) They also speak of a unique epistemology founded in Christ Himself. Moroni wrote: “For behold, the Spirit of Christ is given to every man, that he may know good from evil; wherefore, I show unto you the way to judge; for every thing which inviteth to do good, and to persuade to believe in Christ, is sent forth by the power and gift of Christ; wherefore ye may know with a perfect knowledge it is of God. But whatsoever thing persuadeth men to do evil, and believe not in Christ, and deny him, and serve not God, then ye may know with a perfect knowledge it is of the devil; for after this manner doth the devil work, for he persuadeth no man to do good, no, not one; neither do his angels; neither do they who subject themselves unto him.” (Moroni 7:16-17, italics added) Moroni, like Elder Christofferson, also grounded all knowledge in the person of Jesus Christ. Indeed, he said we could have a “perfect knowledge” by referring to Christ as the standard for all things - a very bold claim indeed.

Some more scriptures will help to illustrate and understand this principle. The scriptures often speak of knowledge of God as something that is universally accessible to all even though it is often not recognized or is rejected. For example, Paul in his letter to the Romans said: “For I am not ashamed of the gospel of Christ: for it is the power of God unto salvation to every one that believeth; to the Jew first, and also to the Greek. For therein is the righteousness of God revealed from faith to faith: as it is written, The just shall live by faith. For the wrath of God is revealed from heaven against all ungodliness and unrighteousness of men, who hold the truth in unrighteousness; Because that which may be known of God is manifest in them; for God hath shewed it unto them. For the invisible things of him from the creation of the world are clearly seen, being understood by the things that are made, even his eternal power and Godhead; so that they are without excuse: Because that, when they knew God, they glorified him not as God, neither were thankful; but became vain in their imaginations, and their foolish heart was darkened.” (Romans 1:16-21) It seems from Paul’s letter that there is a basic knowledge of God that is “revealed” to all people both “from faith to faith” and is “understood by the things that are made”. That is, knowledge of God is given both in the words of the prophets and through the world that we perceive around us. This knowledge of God infuses all things.

Moroni, speaking of the “perfect knowledge” we may have in reference to Christ speaks further of the mechanism behind this perfect knowledge. This mechanism is the light of Christ: “And now, my brethren, seeing that ye know the light by which ye may judge, which light is the light of Christ, see that ye do not judge wrongfully; for with that same judgment which ye judge ye shall also be judged. Wherefore, I beseech of you, brethren, that ye should search diligently in the light of Christ that ye may know good from evil; and if ye will lay hold upon every good thing, and condemn it not, ye certainly will be a child of Christ.” (Moroni 7:18-19)

From these passages we can see that Christ is the source of all things and power by which all things are created and sustained. [3] He is prior to all other things and all things proceed from Him. “By him, and through him, and of him, the worlds are and were created.” (Doctrine and Covenants 76:24, see also John 1:1-3; Doctrine and Covenants 93:10) It is through Christ that we are able to understand anything it all. It is Christ who enlightens are eyes and quickens our understanding. As the Sun gives light to the Earth and is the source of all life on Earth, so He is the light that is in all things and governs all things. It is the light of Christ that enables us to see anything at all. As the Earth orbits around the Sun, so all things are derived from Christ and are sustained and governed by Him.

Elder Christofferson and the other prophets before him have produced a kind of Copernican revolution. Rather than seek to establish the truthfulness of Christ and His Resurrection upon other foundational truths, they declare Christ Himself to be the foundation of all truth. Christ is the very foundation, the reference to which all things are to be judged. Given the fact of His Resurrection all doubts concerning Christ and His gospel are groundless and unfounded precisely because Christ is Himself the ground and foundation by which we know all things. The locus of all truth is Christ Himself.

What proceeds from this foundation? Everything that is important. “If Jesus was in fact literally resurrected, it necessarily follows that He is a divine being. No mere mortal has the power in himself to come to life again after dying. Because He was resurrected, Jesus cannot have been only a carpenter, a teacher, a rabbi, or a prophet. Because He was resurrected, Jesus had to have been a God, even the Only Begotten Son of the Father. Therefore, what He taught is true; God cannot lie. Therefore, He was the Creator of the earth, as He said. Therefore, heaven and hell are real, as He taught. Therefore, there is a world of spirits, which He visited after His death. Therefore, He will come again, as the angels said, and ‘reign personally upon the earth.’ Therefore, there is a resurrection and a final judgment for all.” [4] The gospel of Jesus Christ encompasses the most important truths that we need to know, “all that follows from the fact of His Resurrection.” And through Christ we can know these things with a “perfect knowledge”. Christ is the sure foundation, a foundation whereon if men build they cannot fall. (Helaman 5:12)