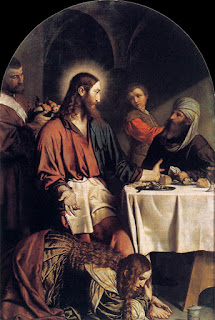 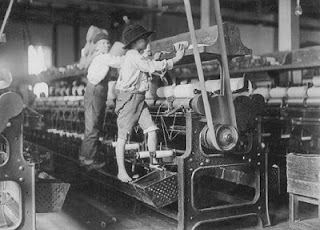 The Book of Mormon contains the teachings of three great heretics or Anti-Christs. The most famous of these is probably Korihor, the Anti-Christ who confronted the prophet Alma. Here is a quick recap of the story. Korihor taught that there was no need for Atonement, there was no God and that whatever a man did was no crime. He debated Alma and demanded a sign of God’s existence. As a sign from God he was struck dumb. When Korihor was struck dumb he admitted that he had always known there was a God and asked to be healed, but was denied this request. He ended his life pitifully, trampled down among a merciless crowd.

The Book of Mormon presumably includes these stories and teachings so that we may recognize these same false doctrines today. It serves as a warning. So it is important to understand exactly what false doctrine is being taught. Obviously, Korihor taught that there was no God and we usually focus on this in Sunday school. But this is not the only thing he taught. There are many atheists who are also humanists, care about others and live moral lives. But Korihor was not this kind of atheist. His teachings encouraged an immoral way of living. He had five basic teachings. (Alma 30:17)

In Korihor’s own view we don’t need God. We don’t need atonement for our sins because nothing we do is sinful. The supreme authority is one’s self. The only thing we have to do is climb our way to the top using our abilities, intelligence and strength.

This reminds me of a more modern philosophy called Social Darwinism. Social Darwinism is a philosophy that justifies and exalts the pursuit of wealth without regard to compassion or responsibility for others on the grounds that the cutthroat business world promotes the “survival of the fittest.” This philosophy is often placed historically in the late nineteenth century but similar ideas are alive and well today. The English philosopher Herbert Spencer saw natural selection, or in his words “survival of the fittest”, working in nature and concluded that this was not only the way things work in nature, but the way they should work in all areas of life, including economics.

In Spencer’s view, predatory instincts served to "exterminate such sections of mankind as stand in the way, with the same sternness that they exterminate beasts of prey and herds of useless animals." Spencer became wildly popular among the elite industrial tycoons of America. People like to think that their way of life is moral and correct and Social Darwinism not only justified harsh business practices, it encouraged and glorified them. In response to the sympathetic feelings we might have toward those less fortunate Spencer tried to put our minds at ease:

"Those shoulderings aside of the weak by the strong, which leave so many 'in shallows and in miseries,' are the decrees of a large, far-seeing benevolence. It seems hard that an unskillfulness which with all his efforts he cannot overcome, should entail hunger upon the artisan. It seems hard that a labourer incapacitated by sickness from competing with his stronger fellows, should have to bear the resulting privations. It seems hard that widows and orphans should be left to struggle for life and death... The whole effort of nature is to get rid of such, to clear the world of them, and make room for better."

Social Darwinism today takes form in some of these commonly-held beliefs:

“If you work hard you can make it. Poor people just haven’t put forth the effort to succeed.”

“If the poor would just get up and work then they wouldn’t be poor anymore.”

“If we help the poor it will just encourage them to be lazy.”

“I worked hard for what I have. Why should I help anyone else? No one helped me.”

“This is a harsh, cruel world and some people just aren’t going to be as successful. There’s nothing you can do about it so you just have to accept it.”

“We shouldn’t create a society of dependents.”

These ideas cover a broad range of economic and political issues that I won’t try to cover here. I have my own doubts about the efficacy of government action to solve these problems. But my main concern is the philosophy of Social Darwinism and what religion has to say about it.

Korihor was very concerned with possessions. He accused the priests of taking property from the working people and living off of them. This was a false accusation but we can see that Korihor believed that the church was keeping people from enjoying their own possessions. He said that the church was keeping the people under a yoke of bondage “that they durst no look up with boldness, and that they durst not enjoy their rights and privileges. Yea, they durst not make use of that which is their own…” (Alma 30:27-28)

“Beware that thou forget not the Lord thy God, in not keeping his commandments, and his judgments, and his statutes, which I command thee this day: Lest when thou hast eaten and art full, and hast built goodly houses, and dwelt therein; And when thy herds and thy flocks multiply, and thy silver and thy gold is multiplied, and all that thou hast is multiplied; Then thine heart be lifted up, and thou forget the Lord thy God… And thou say in thine heart, My power and the might of mine hand hath gotten me this wealth. But thou shalt remember the Lord thy God: for it is he that giveth thee power to get wealth, that he may establish his covenant which he sware unto thy fathers, as it is this day.” (Deuteronomy 8:10-18)

Everything that we have we owe to God. This includes our intelligence and our strength that allows us to prosper and to conquer. And God does not desire that those who have greater ability and strength than others trample the less-fortunate under their feet. Rather God desires that we impart of our substance one to another. It is true that this is a harsh, cruel world but that doesn’t mean that we should perpetuate that condition deliberately. If you are blessed with great business acumen or technical ability or any number of abilities that have enabled you to succeed the Lord expects that these abilities will be used to serve. Our talents and gifts are not to be hoarded and buried in the earth but should be used to bless the lives of others.

What of the philosophy that we shouldn’t help the poor because it will make them lazy and create a society of dependents? King Benjamin addressed this in the Book of Mormon. “Perhaps thou shalt say: The man has brought upon himself his misery; therefore I will stay my hand, and will not give unto him of my food, nor impart unto him of my substance that he may not suffer, for his punishments are just—But I say unto you, O man, whosoever doeth this the same hath great cause to repent.” (Mosiah 4:17-18) It is not for us to judge others, ever. Maybe the beggar would just buy a beer with some change. But that doesn’t mean you can’t give him food directly. What’s even better is to work to address the social and economic conditions that led to the beggar being where he is in the first place. We have a culture in the workplace and in management that can be more employee-focused. We don’t have to depress wages and salaries to the lowest possible level to increase profits. That is the culture of Social Darwinism, not Christianity.

The essence of Korihor’s teaching was selfishness. Korihor replaced worship of God with worship of self. Korihor taught that we should use our strength, intelligence and any other advantages to conquer and to prosper over others. The Lord asks us to use our gifts and talents to benefit and bless others.
Posted by Todd at 4:57 PM 5 comments:

Are We Not All Beggars? 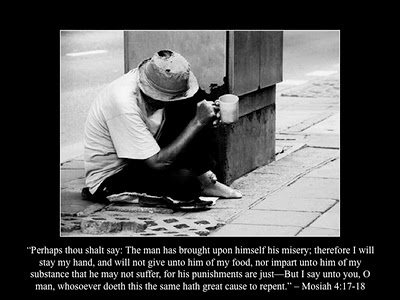