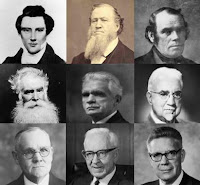 As I got home from work yesterday, sat down to relax and read some Mormon classics I had the idea to make a list of the most influential leaders in Mormon history. I came up with a list of nine people. I’m pretty sure my list includes some people that the majority of Mormons haven’t even heard of. But I justified this to myself because I see that even if Mormons today are not aware of the influence of these people, the church today has been shaped by their lives. So here goes...

1. Joseph Smith, Jr. This was not a difficult choice. Without a doubt, Joseph Smith was and continues to be the most influential figure in Mormon history (at least among mortals). His legacy includes the Church itself, the Book of Mormon, the Inspired Version of the Bible, the Doctrine and Covenants, the Lectures on Faith, the Pearl of Great Price, and countless other writings and sermons which impact our understanding of the Gospel.

2. Brigham Young. I didn’t just choose him because he was the next President of the Church. After Joseph Smith he has had the greatest historical impact on Mormon history. Why are church headquarters in Utah? Why are there so many members of the church in Arizona and Idaho? Church demographics and structure still bear the mark of Brigham Young. He was the perfect man to lead the church after Joseph Smith’s death. He was the builder of a nation and a powerful leader. He also left a prolific legacy in the Journal of Discourses.

3. Parley P. Pratt. Great Mormon missionary. Left us A Voice of Warning and Key to the Science of Theology. One of the great martyrs after Joseph Smith.

4. Orson Pratt. The Pratt family comes in strong in the list. Orson, along with his brother, was very influential in the formulation of Mormon doctrine and theology. He was also an accomplished mathematician and inventor. He was one of the inventors of the odometer. He sometimes had differences with Brigham Young in particular points of doctrine but both left a impressionable mark on the church.

5. B.H. Roberts. One of the most prolific writers in the church’s history and a great scholar. The writings of B.H. Roberts include the three-volume New Witness for God, Outlines of Ecclesiastical History, the five-volume Seventy’s Course in Theology, and the six-volume Comprehensive History of the Church of Jesus Christ of Latter-day Saints. He also compiled the writings of Joseph Smith in the seven-volume History of the Church of Jesus Christ of Latter-day Saints. He gave what may be the most extensive examination of the Mormon understanding of God in The Mormon Doctrine of Deity: the Roberts-Van der Donckt Discussion. He had a few run-ins with other church leaders. In one case he recommended that church leadership confront seriously the attacks on the historicity of the Book of Mormon in his Studies of the Book of Mormon. Later, in what he considered his finest work, Roberts prepared the manuscript of The Truth, the Way, and the Life but it was denied publication by the church.

6. John A Widtsoe. A Norwegian immigrant, scientist and academician. Widtsoe was one of a group of influential scientists to participate in church leadership. He developed a systematic exposition of Mormon theology in his book Rational Theology: As Taught by the Church of Jesus Christ of Latter-day Saints. As a scientist, Widtsoe placed a great emphasis on the physical sciences and understood scientific learning to be an important part of the process of deification. His other works include Joseph Smith as Scientist: A Contribution to Mormon Philosophy, a compilation of the Discourses of Brigham Young, and Priesthood and Church Government in the Church of Jesus Christ of Latter-day Saints.

7. James E. Talmage. Another scientist General Authority. The works of James E. Talmage are still widely read by many members of the church. His most famous book, Jesus the Christ, is still included in the missionary library. Some other well-known books include The Articles of Faith and The Great Apostasy.

8. Joseph Fielding Smith. He was President of the Church for only two years but he served as a member of the Quorum of the Twelve Apostles for sixty-two years. He was President of the Quorum of the Twelve for nineteen years. Works by Joseph Fielding Smith include his three-volume Doctrines of Salvation, his five- volume Answers to Gospel Questions, and his widely-used compilation Teachings of the Prophet Joseph Smith. While the church itself established no definitive position on the Theory of Organic Evolution, Smith differed with Roberts, Widtsoe, and Talmage in his understanding of the age of the Earth and the development of life on Earth. His views on these subjects were published in his book Man, His Origin and Destiny.

9. Bruce R. McConkie. The most recent person on the list and one of the best known. Bruce R. McConkie wrote some of the most extensive works on Church Doctrine in recent time. His most famous work is probably Mormon Doctrine. While this book is not official “Mormon Doctrine” much of the Bible Dictionary in the Church’s edition of the Bible borrows from his book. He also wrote the chapter headings of the more recent editions of the Standard Works. He compiled the writings of his father-in-law, Joseph Fielding Smith, in Doctrines of Salvation. He also authored a six-volume work, The Messiah Series as well as A New Witness for the Articles of Faith.
Posted by Todd at 6:27 AM