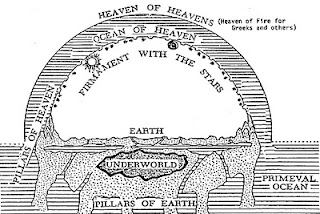 According to one theory, Wellhausen's Documentary Hypothesis, the first creation narrative was written by the Priestly Source (P). The Priestly Source is thought to be a priest or group of priests living in Babylonian captivity. As they kept the ancient records of Israel they paid particular attention to those matters of special interest to priests such as the extensive ritualistic instructions in Leviticus and genealogies in Numbers. But it is also believed that this first creation narrative has been attributed to the Priestly Source as well. Karen Armstrong, in her book A History of God, said: "the didactic tone and repetitions suggest that P's creation story was also designed for liturgical recital" (64). Indeed it's structure is quite elaborate and organized with symbolism deeply enmeshed in the writings, possibly for use in the the ancient temple.
On recurring symbol is the number seven. The number seven is highly symbolic in the Torah. Seven signifies divine completion. The most obvious use of the number seven is that there are seven days of creation. The first sentence of the Hebrew Bible contains seven words: "Bereshith bara elohim eth hashamayim va'eth ha'arets". The second sentence contains 14 words. The verses about the seventh day (Genesis 2:1-3) contain 35 words (7x5). The word "elohim" or "God" appears 35 time (7x5). The word "earth" appears 21 times (7x3). Both the phrases "and it was so" and "God saw that it was good" appear seven times.
The Framework Interpretation of Genesis posits an elaborate structure in the text developed to reinforce the commandment to honor the Sabbath. The narrative can be broken down into two triads. The first triad is of the first three days and the second triad is of the next three days. These two triads parallel each other. For example, on the first God says "light there by light" (verse 3) and on the fourth day says "let there be lights" (verse 14). On the second day, God separates the waters above from waters beneath and on the fifth day fills the waters above with birds and the waters beneath with swimming creatures. On the third day God brings forth dry land and vegetation and on the sixth day makes animals and mankind. These two triads can also be seen as part of three kingdoms. In the first three days God creates three creation kingdoms. In the next three days he creates the creature kings. On the seventh day the creator king takes his rest.
The cosmological view given in Genesis is consistent with the Middle-Eastern understanding of the time (shown above). Civilizations in the region understood the earth to be a flat disk suspended in waters, or "mayim". The sky was understood to be a metal bowl which separated the earth and the surrounding waters from the waters above, which formed the heavens, or "shamayim".
The creation account of Genesis is sometimes compared with the contemporary Babylonian creation story, Enuma Elish. Enuma Elish shares the idea of a primeval chaos with waters above and below. But the creation narrative of the Hebrew Bible is distinct in its portrayal of creation as an ordered and planned construction. While Enuma Elish, as well as many other creation stories, portray the universe as a result of divine conflict among competing gods, the creation by Elohim is seemingly effortless, brought forth by simple verbal command. The Genesis narrative places special emphasis on organization. The story uses the word "bhdel" meaning "to divide" when separating the light from the darkness, the waters above from the waters beneath, the day from the night. Every living thing is organized and made to bring forth after its kind.
Both the Genesis narrative and Enuma Elish share six days of creation followed by a day of rest. However, whereas in Enuma Elish the creation of mankind is something of an afterthought, mankind is Elohim's crowning creation. To mankind, or "adham", God gives his own image. Mankind is given dominion over all things, all the plants and animals. Of note here is that mankind, adham, is created male and female. It is clear here that the author was referring to "adham" as mankind and not the individual Adam. This first creation account mentions the creation of mankind, both men and women. This is noteworthy because the second creation account places more particular emphasis on the relationship between the men and women in the form of the individuals Adam and Eve.
It can be said that both creation narratives in Genesis have a message, a moral. In the last three verses (Genesis 2:1-3), God rests from his labors on the seventh day and sanctifies it. The verb "rest" is in Hebrew, "shaboth", which is now understood in English as the "Sabbath". God blesses, "bharekh", and sanctifies, "qaddesh", the seventh day because on that day he rested. The first creation narratives ends with the lesson that the Sabbath is a blessed and holy day on which we should rest from our labor and sanctify the Sabbath as did Elohim on the seventh day of creation.
References:
http://www.aarweb.org/syllabus/syllabi/g/gier/306/commoncosmos.htm
Armstrong, Karen. A History of God: The 4000-Year Quest of Judaism, Christianity and Islam. 1993.
Posted by Todd at 10:29 PM