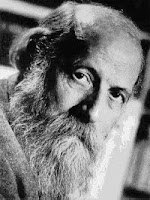 Rabbi Schneur Zalman, The Rav of Northern White Russia (died 1813), was put in jail in Petersbutf, because the mitnagdim had denounced his principles and his way of living to the government. He was awaiting trial when the chief of the gendarmes entered his cell. The majestic and quiet face of the rav, who was so deep in meditation that he did not at first notice his visitor, suggested to the chief, a thoughtful person, what manner of man he had before him. He began to converse with his prisoner and brought up a number of questions which had occurred to him in reading the Scriptures. Finally, he asked: “How are we to understand that God, the all-knowing, said to Adam: ‘Where art thou?’”

“Do you believe,” answered the rav, “that the Scriptures are eternal and that every era, every generation and every man is included in them?”

“I believe this,” said the other.

“Well then,” said the zaddik, “in every era, God calls to every man: ‘Where are you in your world? So many years and days of those allotted to you have passed, and how far have you gotten in your world?’ God says something like this: ‘You have lived forty-six years. How far along are you?”

When the chief of the gendarmes heard his age mentioned, he pulled himself together, laid his hand on the rav’s shoulder, and cried: “Bravo!” But his heart trembled.

As I mentioned in my last post, the seemingly simple can be quite powerful when understood for its underlying symbolism. The name “Adam” is Hebrew, meaning “mankind”. While on one level the Biblical text tells the story of a particular individual, it also tells the story of all mankind, as well as the story of every individual. We are to understand the story as we stand in Adam’s place and imagine God speaking to us. God has given us commandments and the violation of these commandments brings us into opposition with God, for he “cannot look upon sin with the least degree of allowance” (Doctrine and Covenants 1:31).

I quote again from Buber. God says to Adam: “Where art thou?”

In so asking, God does not expect to learn something he does not know; what he wants is to produce an effect in man which can only be produced by just such a question, provided that it reaches man’s heart—that man allows it to reach his heart.

Adam hides himself to avoid rendering accounts, to escape responsibility for his way of living. Every man hides for this purpose, for every man is Adam and finds himself in Adam’s situation...

Everything now depends on whether man faces the question. Of course every man’s heart, like that of the chief in the story, will tremble when he hears it. But his system of hideouts will help him to overcome this emotion. For the voice does not come in a thunderstorm which threatens man’s very existence; it is a “still small voice”, and easy to drown... Adam faces the Voice, perceives his enmeshment, and avows: “I hid myself”; this is the beginning of man’s way. The decisive heart-searching is the beginning of the way in man’s life; it is, again and again, the beginning of a human way. (pages 12-13)

Everyone must take this step and face the Voice. Until Adam takes responsibility for his action he does not progress. Hiding from God provides only a false solace. It is like trying to solve problems by forgetting about them. Forgetting may bring relief but it does not actually change anything—the problems are still there. The reason God calls after Adam is not to find him but to help Adam to find himself. When Adam understands where he is he can decide where he must go.

Adam and Eve are made to face the consequences of their action: pain and death. Because the Lord cannot look upon sin with the least degree of allowance they are banished from his presence. As Adam, mankind, we face a similar, personal fall from favor with God by sin. We are cut off from the presence of God and suffer sorrow and spiritual death. The objective now is to return to Eden. This is the “teshuvah”, the returning to God. This is what is meant by repentance, to return. The Lord still cannot allow sin, but Adam can return to the presence of God through covenant.

By sinning, Adam has become “natural man” and is in effect “an enemy to God... and will be, forever and ever, unless he yields to the enticings of the Holy Spirit, and putteth off the natural man and becometh a saint through the atonement of Christ the Lord, and becometh as a child, submissive, meek, humble, patient, full of love, willing to submit to all things which the Lord seeth fit to inflict upon him, even as a child doth submit to his father” (Mosiah 3:19). Adam can become “kadosh”, or holy once again, through the atonement of Christ to be brought back “at-one” with God.

So Adam, where art thou? “Have ye been spiritually born of God? Have ye received his image in your countenances? Have ye experienced this mighty change in your hearts? Do ye exercise faith in the redemption of him who created you? Do you look forward with an eye of faith, and view his mortal body raised in immortality, and this corruption raised in incorruption, to stand before God to be judged according to the deeds which have been done in the mortal body?” (Alma 5:14-15).

“Behold, he sendeth an invitation unto all men, for the arms of mercy are extended towards them, and he saith: Repent, and I will receive you” (Alma 5:33).
Posted by Todd at 11:48 PM