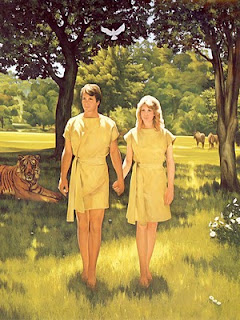 This is my second post in the two-part series on the creation narratives of Genesis. This second narrative is found in Genesis 2:4-25. After reading the first two chapters I noticed very distinct messages and approaches in each chapter. I also noticed the clear demarcation of in Genesis 2:4 opening a new account: “These are the generations of the heavens and of the earth...” One detail of note is that in Hebrew the scriptures began referring to the creator as “Yahweh”. The previous creation account referred to the creator as “Elohim”. For this reason, the second creation narrative is often credited to another author called the Jahwist (J). The name “Yahweh” is often translated in English to “Jehovah”. However, Jews prefer not to vocalize the name “Yahweh” when reading the Torah and substitute this name with “Adonai”, meaning “Lord”. The King James Version of the Bible follows this practice with few exceptions. Therefore, the change in the name of the creator can be observed in English by the use of the word “Lord”.

One obvious indication that this is a separate creation narrative is the statement in the fifth verse: “and every plant of the field before it was in the earth and every herb of the field before it grew... and there was not a man to till the ground”. This verse is going back to the time before there were plants or people. Later, in the story we find that there were not yet animals. But in the previous creation narrative God had created plants, animals and man. It appears these creation accounts are not sequential in time but parallel. I see these two accounts portraying the same story but for different purposes.

God creates man “from the dust of the ground”. The word for “ground” in Hebrew is “adhamah” which is something of a play on words. The word “adhamah” is composed of four Hebrew letters: aleph, daleth, mem, he. If the last letter “he” is removed, the three letters that remain form the word “adham” or “mankind”. Thus, in Hebrew, “mankind” is literally taken out of the “ground”. Yahweh then animates the body of man by breathing into it the breath of life so it becomes a living soul.

Now that there is a man to till the ground, Yahweh plants a garden and places the man in it. He plants many trees and is permitted to eat from all but The Tree of Knowledge of Good and Evil. He is warned that if should he eat the fruit of this tree he will surely die. The account also gives the geography and rivers of the surrounding area. I will skim over a lot of this to get to the part that I think is the most important part of the story.

Yahweh says “It is not good that the man should be alone; I will make him an help meet for him” (verse 18). The word “meet” in Hebrew is “neghedh”, meaning a front, i.e. part opposite; specifically a counterpart, or mate. Yahweh then forms out of the ground every beast of the field and fowl of the air. These are presented to Adam and he names them. All these creatures are created from the same source as man himself, the ground or “adhamah”. But among all these many useful beasts and creatures there is found no aid “meet” for man, or “counterpart” corresponding to him.

Finally, Yahweh causes Adam to sleep and takes part of the man’s own flesh to create a companion: a woman. The woman is made from Adam’s rib, in Hebrew “tsela”, which can also be understood to mean “side”. Adam then says, “This is now bone of my bones, and flesh of my flesh” (verse 23). This companion is named “ishah”, which is woman, because she was taken out of man, “ish”.

As I have mentioned previously, I don’t think the literal, historical veracity of this story is what is important. I doubt that Eve was literally created out of a rib. But who knows? Maybe it is literal. But I think this story is creating an image to portray an important meaning. The man was alone. He needed a counterpart, an opposite, a mate. All the animals with their many uses were not able to fill this role. They were made of the same materials. The cattle of the field are useful for food and labor. But none of these corresponded to man on the deepest and most important levels. For this, the Lord needed to create a new life out of the man himself—someone who he could connect with as if the two were one soul. This was done by creating woman, the final act of creation.

This is the great lesson of the second creation narrative. Men and women should be connected to each other in every possible way. They are opposite and similar, contrasting and complementing. They are as one flesh though in two separate bodies. “Therefore shall a man leave his father and his mother, and shall cleave unto his wife: and they shall be one flesh”.