The Fall, Part 3: Adam to Michael 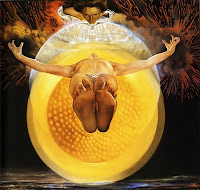 The word “atonement” is something of a neologism. It was created by William Tyndale in the sixteenth century as he was preparing an English translation of the Bible. He wanted to use a word that correctly matched the biblical Hebraic concept and found no word satisfactory. He created the word “atonement” to describe a unification or reconciliation, an “at-onement”. The Atonement of Christ is designed to bring mortal man, Adam, to be made “at-one” with God. This process is not one of physical proximity but of personal development.

In the Garden of Eden man was with God but at the same time far from him. All the perfection and happiness of immortality was given to him but he could not comprehend it. Adam was in the Garden of Eden but he was never qualified to be there. He lacked knowledge and understanding. He was meant not just to be with God but to be like God. It is appropriate that in Mormon doctrine Adam is understood to be the same being as Michael (Doctrine and Covenants 27:11). The name Adam is Hebrew meaning "mankind". The name Michael is also Hebrew and means “who is like God”. If we are to liken this unto ourselves we all have a dual nature: our mortality in “Adam” and our divinity in “Michael”.

So how are we to be transformed from Adam to Michael? It is a giant leap considering the vast differences between mortal man and divine beings. Adam was formed from the ground, the “adamah”. Our mortal man will die and decay. Our bodies and our minds will fail. Our capabilities, though significant, are ultimately limited and terminable. God is immortal and will not die or suffer the afflictions of mortal bodies. He can be understood to exceed all our capacities and has power likely beyond comprehension. How is Adam transformed into Michael “who is like God?” The answer is through the atonement of Jesus Christ. The atonement makes us “at-one” with God, like unto God, “Mi-Cha-El”.

The purpose of our life is to develop as sons and daughters of God. Just as children must leave home to develop, Adam must leave Eden to grow. He has gained knowledge of good and evil. He must now acquire wisdom to choose the good over the evil. He must see that Eden is not the natural condition of things in the universe but that without sustained care, the world around us begins to decay. As children leave the home they come to realize that the gas tank will empty, the bank account depletes and that work is required to sustain order. Just as entropy drives a system to a state of disorder without an input of work, life will fall into disarray without action to put things in order. Eden was creation made by God and more importantly sustained by God. But when God left man alone the earth brought forth noxious weeds and thistles. Plants needed to be cultivated and food had to be earned by the sweat of the brow.

It might seem cruel for God to leave Adam and Eve alone to suffer. Corianton thought so and Alma explained the parable to him. The story is fitting because Corianton himself had to pass through his own affliction and fight his own demons as he faced the burden of sin.

Alma said to his son: “Ye do try to suppose that it is injustice that the sinner should be consigned to a state of misery. Now behold, my son, I will explain this thing unto thee. For behold, after the Lord God sent our first parents forth from the garden of Eden, to till the ground, from whence they were taken—yea, he drew out the man, and he placed at the east end of the garden of Eden, cherubim, and a flaming sword which turned every way, to keep the tree of life—Now, we see that the man had become as God, knowing good and evil; and lest he should put forth his hand, and take also of the tree of life, and eat and live forever, the Lord God placed cherubim and the flaming sword, that he should not partake of the fruit—And thus we see, that there was a time granted unto man to repent, yea, a probationary time, a time to repent and serve God. For behold, if Adam had put forth his hand immediately, and partaken of the tree of life, he would have lived forever, according to the word of God, having no space for repentance; yea, and also the word of God would have been void, and the great plan of salvation would have been frustrated.” (Alma 42:1-5)

Adam and Eve were not ready to be in Eden, they were not yet as God and they were not prepared for immortality. They were still immature. They were given time to prepare. And what was this preparation? They were to “repent and serve God”. There are two words in Hebrew for the verb “repent”. One is “nicham” which literally means to sigh and by implication to feel sorry. The other is “shuv” which literally means to turn. This life is a time to prepare to meet God (Alma 34:32), to serve him, to feel after him and to turn to him. The “Way” to God is Christ.

We are to be perfect like our Father in Heaven (Matthew 5:48). But how are we to know the way, how do we know the Father? Jesus said: “I am the way, the truth, and the life: no man cometh unto the Father, but by me” (John 14:6). Christ and God the Father are one and we are to be one with them (John 17:11). We are to put away are old life and die with Christ so that we may be resurrected with him into a new life, a life with God (Romans 6:3-8). The Atonement of Christ cleanses us from sin but it also does much, much more. It is through the Atonement that we share an inheritance with Christ. We become “joint-heirs with Christ; if so be that we suffer with him, that we may be also glorified together” (Romans 8:17).

Christ’s Atonement has the power to take mortal, finite, temporal creature and transform it into an immortal, infinite, eternal being. It is the infinite Atonement. This body that was formed from the raw materials of the earth can be cast into the likeness of the Father. We are tried and proven through experience of mortality. We come to see how the world works. We see that it is a difficult universe filled with complexity and awesome destructive power. But through an understanding of the operative laws in our universe we can return to Eden. We are always facing eastward toward Eden striving to return once again. But this time we will be prepared to be there. This time we will be permitted to eat of the fruit of the Tree of Life. We will become divine beings, returning not only to be with God but to be like God. We will be transformed from Adam to Michael.
Posted by Todd at 10:21 PM