Ring in the Christ 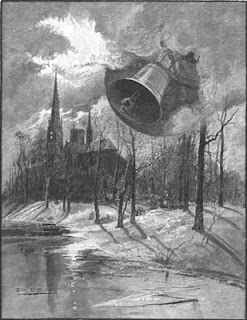 I was thinking that a New Year’s Eve post might be appropriate and with it one of my favorite poems – “Ring Out, Wild Bells” by Alfred, Lord Tennyson. This poem was later made into a hymn set to music by Crawford Gates. The poem was published in 1850 as part of “In Memoriam” which was an elegy to his sister’s fiancé Arthur Henry Hallam. Hallam was a close friend of Tennyson’s at Cambridge before dying of a cerebral hemorrhage in 1833. Tennyson worked on “In Memoriam” for the next seventeen years. The major theme of the elegy is the search for hope after a painful loss. It is one of Tennyson’s greatest works and one of the most famous of nineteenth century literature.

I especially enjoy the poem when sung to the tune composed by Crawford Gates. The song is found in the LDS hymn book as hymn number 215. It is a haunting melody set in a morose minor key. It doesn’t include all the stanzas from the original poem but takes the first two stanzas and ends with the eighth and last stanza.

This is the only hymn in the LDS hymn book I know that is classified as a New Year’s hymn. It is very fitting with the repeated plea to let old things pass away and to bring in the new and good. The New Year has long been a time of beginning again. I mentioned in my last post the Jewish holiday Rosh Hashanah which means “the head of the year”. Rosh Hashanah commemorates the creation of the world and is the first of the Ten Days of Repentance, Aseret Yemei Teshuvah. The Mishnah refers to Rosh Hashanah as “The Day of Judgment”. The ten days set aside for Aseret Yemei Teshuvah are a time for all to practice “teshuvah” which is “repentance” or literally “returning”. The Ten Days of Repentance concludes with Yom Kippur, the Day of Atonement.

I find this a very profound way at looking at the New Year. The Gospel of Jesus Christ is all about returning and atonement with God. Tennyson’s poem lists several evils surrounding us in the world but encourages us to let them go and let them die. My favorite part is that the poem ends with the source of redemption, which is The Christ. Appropriately, Crawford Gates’ melody for this poem ends with the ringing in of The Christ on a major chord.

And now the poem:

Ring out the grief that saps the mind,
For those that here we see no more,
Ring out the feud of rich and poor,
Ring in redress to all mankind.

Ring out a slowly dying cause,
And ancient forms of party strife;
Ring in the nobler modes of life,
With sweeter manners, purer laws.

Ring out the want, the care the sin,
The faithless coldness of the times;
Ring out, ring out my mournful rhymes,
But ring the fuller minstrel in.

Ring out false pride in place and blood,
The civic slander and the spite;
Ring in the love of truth and right,
Ring in the common love of good.

Ring in the valiant man and free,
The larger heart, the kindlier hand;
Ring out the darkness of the land,
Ring in the Christ that is to be.